Ofgem has concluded that two large power stations, Hornsea One Ltd (co-owned by Orsted) and Little Barford (operated by RWE) did not remain connected after the lightning strike. They have agreed to make a voluntary payment of £4.5 million each into Ofgem’s redress fund.

Ofgem found that local network operators disconnected and reconnected consumers in response to the loss of power as expected. However, UK Power Networks began reconnecting customers without being asked to by the ESO, which could have potentially jeopardised recovery of the system. This has no impact on 9 August and UK Power Networks has recognised this technical breach, taken swift action to prevent any future reoccurrence, and agreed to pay £1.5 million into Ofgem’s voluntary redress fund. All parties have fully cooperated with the regulator throughout its investigation.

“The Electricity regulator, Ofgem, has published its report on the electricity system incident that happened on August 9th.  It states that payments have been made into Ofgem’s “voluntary redress” fund by three major industry actors in recognition of direct impacts on electricity users or an impact that could easily have arisen in view of departure from correct procedures. These actors are two generating companies – Ørsted and RWE – whose plant disconnected from the system when it shouldn’t have, and a Distribution Network Operator (DNO) – UK Power Networks – that started to restore demand before receiving confirmation from the Electricity System Operator (ESO) that it was safe to do so.

None of the contributing events on their own should normally have caused any interruptions to electricity users’ supply.

“The initiating event was a short circuit on a 400 kV overhead line caused by a lightning strike.  Such faults typically happen tens of times each year on the transmission network and do not cause losses of supply.  On this occasion, however, it caused a steam turbine at Little Barford combined cycle gas turbine power station, owned by RWE, to trip.  It is still not completely clear why this happened or why, to compound the problem, a gas turbine there also tripped a minute later.

“The voltage depression caused by the short circuit fault also led to the loss of almost all of the power being produced at Hornsea offshore wind farm.  This, again, should not have happened.

“The network fault and the loss of generation at Hornsea and Little Barford caused the loss of further generation, small scale ‘distributed generation’ connected to the distribution network.  The combination led to a period in which there was not enough generation to meet demand and the system’s frequency started to fall.  ‘Frequency containment reserve’ scheduled by the ESO, mostly from generators but also from batteries, was not enough to prevent the system’s frequency from falling so far below statutory limits that automatic ‘low frequency demand disconnection’ (LFDD) equipment was triggered.  This disconnected an estimated 1.1 million electricity users.

“By international standards, electricity supply in Britain is very reliable and the event on August 9th was small, largely because LFDD succeeded in preventing the situation from getting a lot worse. However, the impact on rail users in the south-east, in particular, was significant.  This was largely due, so it seems, to the inadvertent operation of protection equipment on certain types of trains operated by Govia Thameslink.  Some water supplies were also affected.

“Ofgem’s report questions whether the ESO and the DNOs take sufficient responsibility in ensuring that equipment connected to the system – generators, interconnectors and loads – behaves in a way that contributes to system stability rather than putting the system at unreasonable risk.  This is arguably becoming more difficult than in the past.  The volume of small scale ‘distributed’ generation capacity has grown from an estimated 7 GW in 2009 to more than 37 GW today.  This represents tens of thousands of individual installations in contrast to the hundreds of power stations that met demand for electricity up to recent years.  (The annual peak demand for electricity in Britain is expected to be around 60 GW over the Winter of 2019/20).

Major disruption to parts of the rail network, including blocked lines out of Farringdon and Kings Cross stations along with wider cancellations and significant delays impacting thousands of passengers. A major contributor to the disruption relates to a particular class of train operating in the South-East area – approximately 60 trains unexpectedly shut down when the frequency dropped below 49Hz, half of which required a visit from a technician to restart. (The remaining 30 trains required a technician to attend each train with a laptop to reset the trains.The effects were exacerbated as the fleet was undergoing a software change which meant the train drivers could not recover trains which were operating on the new software. The train manufacturer, Siemens, are developing a patch which will allow the drivers to recover the trains themselves without the need for a reboot or technician to attend site. In addition Siemens will investigate how the train could be made to operate for a short time with a supply frequency of 48.5Hz.) The impact to the rail network was that there were 23 train evacuations and thousands of passengers had their journeys delayed with 371 trains cancelled, 220 part cancelled, and 873 trains delayed. London St Pancras and King’s Cross stations had to close for several hours due to overcrowding and London Euston went exit only for a period of time.

Impacts to other critical facilities including Ipswich hospital (lost power due to the operation of their own protection systems) and Newcastle airport (disconnected by the Low Frequency Demand Disconnection scheme).

Based on our analysis we have identified the following areas where lessons can be learned:

While the processes and procedures in place on 09 August generally worked well to protect the vast majority of consumers, there was however significant disruption – over 1m customers were without power for up to 45 minutes, rail services were severely impacted and some critical facilities were without power. Therefore, reflecting on the scale of disruption caused to the public, there are some areas where we believe a wider review of policy, processes or procedures may be appropriate, this includes:

Prior to 4:52pm on Friday 09 August Great Britain’s electricity system was operating as normal. There was some heavy rain and lightning, it was windy and warm – it was not unusual weather for this time of year. Overall, demand for the day was forecast to be similar to what was experienced on the previous Friday. Around 30% of the generation was from wind, 30% from gas and 20% from Nuclear and 10% from interconnectors.

However, immediately following the lightning strike and within seconds of each other:

The ESO was keeping 1,000 MW of automatic “backup” power at that time – this level is what is required under the regulatory approved Security and Quality of Supply Standards (SQSS) and is designed to cover the loss of the single biggest generator to the grid.

All the “backup power” and tools the ESO normally uses and had available to manage the frequency were used (this included 472 MW of battery storage). However, the scale of generation loss meant that the frequency fell to a level (48.8 Hz) where secondary backup systems were required to disconnect some demand (the Low Frequency Demand Disconnection scheme) and these automatically kicked in to recover the frequency and ensure the safety and integrity of the network

This system automatically disconnected customers on the distribution network in a controlled way and in line with parameters pre-set by the Distribution Network Operators. In this instance c. 5% of GB’s electricity demand was turned off (c. 1 GW) to protect the other 95%. This has not happened in over a decade and is an extremely rare event. This resulted in approximately 1.1m customers being without power for a period.

The disconnection of demand along with the actions of the ESO Control Room to dispatch additional generation returned the system to a normal stable state by 5:06pm. The DNOs then commenced reconnecting customers and supply was returned to all customers by 5:37pm.

There were a number of very significant consequences from these events, the most significant of which include:

Our preliminary findings based on analysis to date are: 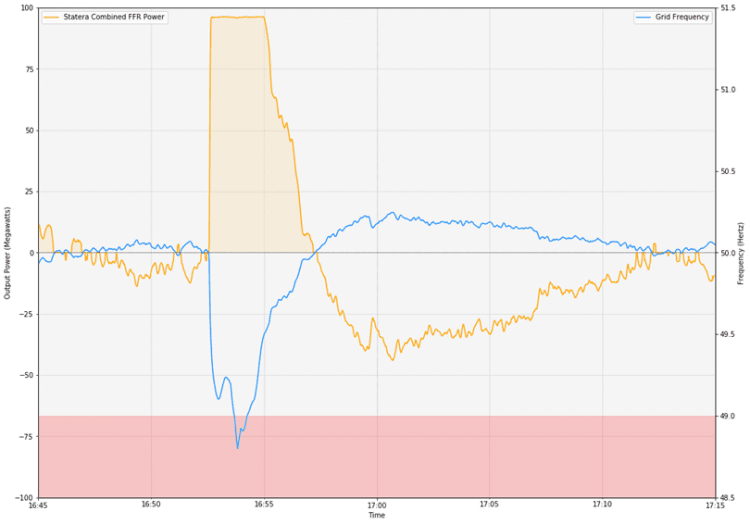 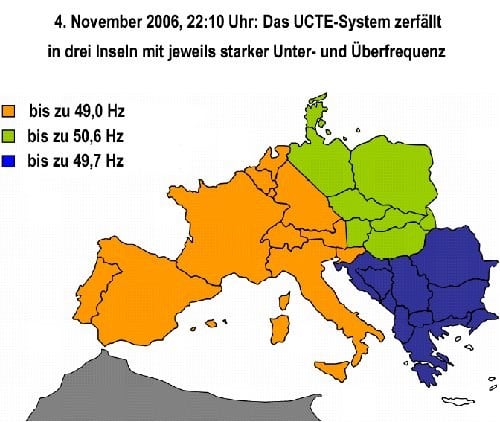 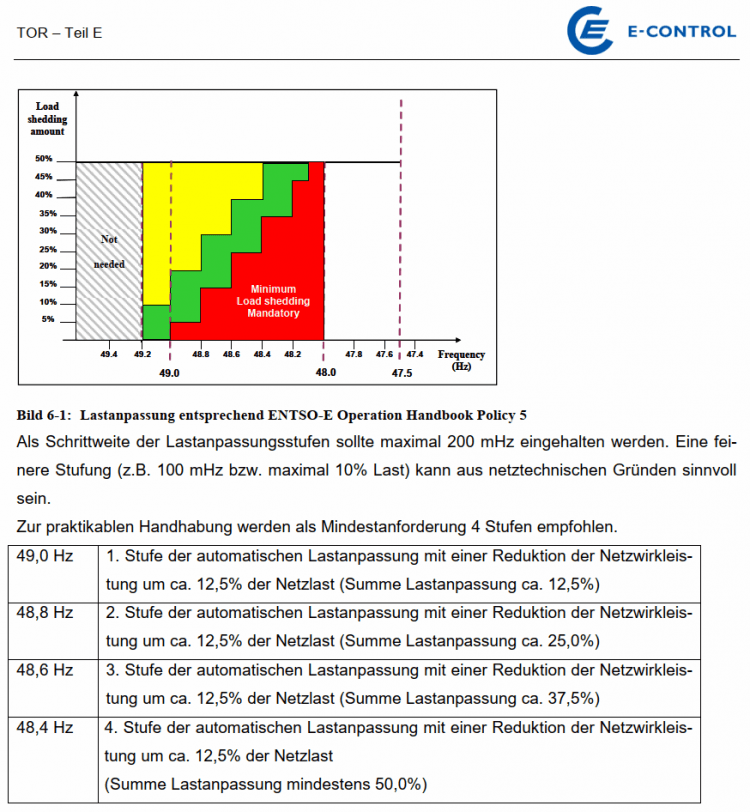 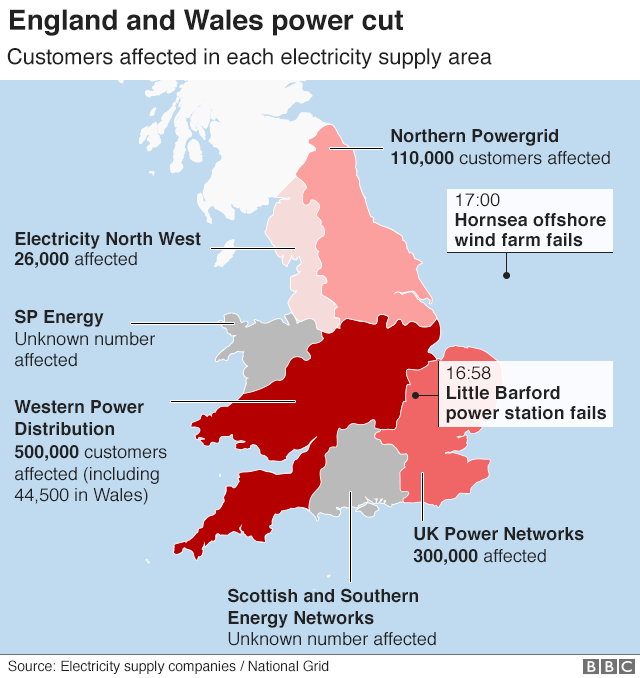 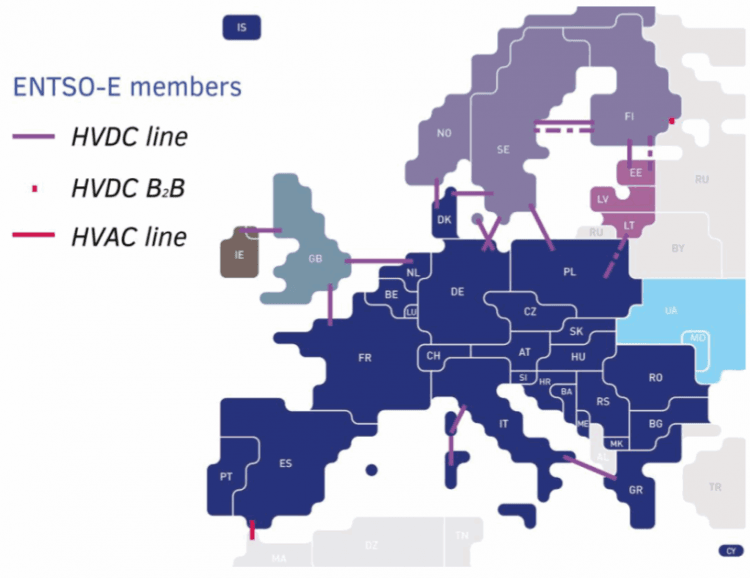 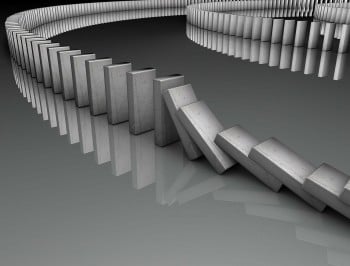 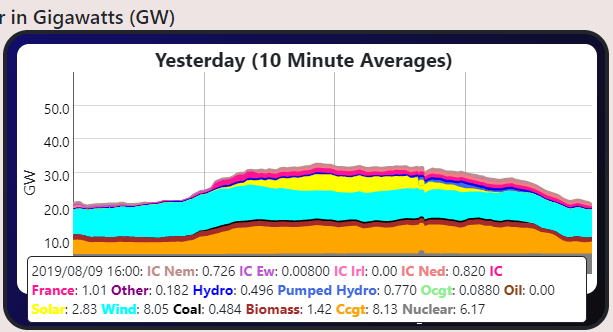 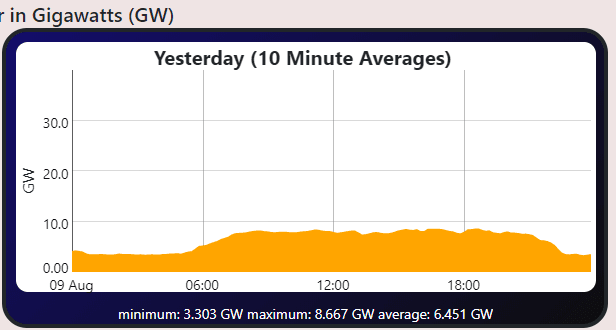 The Observer view on Britain’s blackout

And while a multiple generator failure may be a rare event, it is far from unheard of – the last was in 2008. Britain’s energy network should be able to cope with a once-in-a-decade event without causing so much potentially dangerous disruption. Even though the culprit in this instance was not a cyber attack, it illustrates just how vulnerable we may be to a malign attack of this nature.

This should ring alarm bells about the resilience of British infrastructure to rare but far from unprecedented events. Resilience planning requires a joint effort by industry and government. But because Whitehall has been so consumed by Brexit in recent years, resilience planning – alongside many other big policy challenges facing the country, like a solution to the social care crisis – appears to have fallen by the wayside. What other vulnerabilities are there in the system that could be exploited by our enemies?

The power outage should function as a rude awakening to the brittleness of core parts of British infrastructure to cope with events that should not be debilitating. Is this really a country ready for the huge strain a no-deal Brexit would probably place on essential services? It hardly looks like it.

“As the Electricity System Operator we do not generate power directly, but use the power made available by the industry to manage the system and balance supply and demand. The root cause of yesterday’s issue was not with our system but was a rare and unusual event, the almost simultaneous loss of two large generators, one gas and one offshore wind, at 16.54pm. We are still working with the generators to understand what caused the generation to be lost.

“Following the event, the other generators on the network responded to the loss by increasing their output as expected. However due to the scale of the generation losses this was not sufficient, and to protect the network and ensure restoration to normal operation could be completed as quickly as possible, a backup protection system was triggered which disconnects selected demand across GB.

“Following the incident, the system was secured, and the Electricity System Operator gave the all clear to the Distribution Network Operators (NDOs), power companies who are responsible for supply at a local level, within 15mins, so that they could start to restore demand. All demand was reconnected by the DNOS by 17.40pm. We appreciate the disruption cause and will continue to investigate, with the generators involved and wider stakeholders, to understand the lessons learned.”

The incident raises questions about the state of the country’s infrastructure, which has had less investment than most other countries in the Organization for Economic Co-operation and Development over the last three decades. Chancellor of the Exchequer Sajid Javid said Friday, before the outage, that he will publish a National Infrastructure Strategy in the autumn as the U.K. seeks to boost investment in areas including transport and digital connectivity.

The National Grid put Friday’s chaotic blackout down to “incredibly rare” circumstances, but the electricity network has had three near-misses in as many months leading up to it.

The Guardian understands that in every month since May there has been a “frequency excursion” – a severe dip in the grid’s frequency from its normal range of around 50Hz. On Friday the blackout was triggered when the frequency slumped to 48.88Hz. Industry sources have confirmed the grid’s frequency has also fallen below 49.6Hz three other times in recent months – the deepest falls seen on the UK grid since 2015.