Under normal conditions, the pan-European adequacy analysis indicates no risk for supply shortage during system-wide peak moments. Nevertheless, extreme cold spells, combined with low renewable generation and unplanned outages of generation and transmission, indicate a risk of supply shortages in Belgium and France in January 2020. Adequacy risk is observed when the daily average temperature in that region drops to -5°C, which is nearly 10°C lower than the normal January temperature and rather unlikely in the region. Under these circumstances, both countries would heavily rely on imports.

No significant events were recorded in summer 2019. Some heatwaves were recorded, but with no impact on electricity supply. Hydro reservoir levels remained stable over 2019 and were near average by the end of the summer season in most regions, except Italy, where reservoir levels settled slightly above historical minimum levels.

Evolution of NGC per technology. 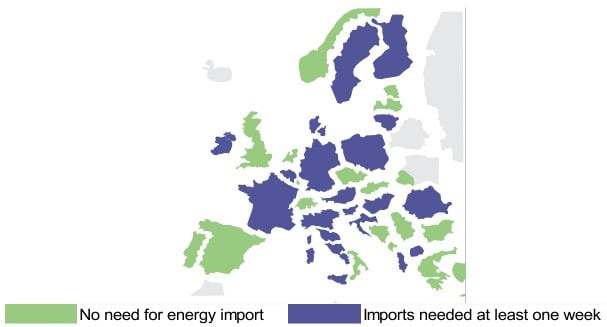 Results on a weekly basis presented in Table 2 indicate that Belgium, Germany, Finland, and France could face some adequacy issues at the beginning of 2020. This is a first-time when adequacy risk is identified in Germany under severe conditions (‘deterministic stress test’). This is mainly explained by the decommissioning of nuclear, hard coal and lignite units (accounting for 3.3 GW) and increased system reserve need (around 1.1 GW) compared to winter 2018/2019. 0.8 GW of decommissioned capacity will serve as additional out-of-market measures to cope with adequacy risks. Nevertheless, this risk was not confirmed in probabilistic assessments (cf. Section 3.5).

Furthermore, it should be mentioned that the potential contribution of imports from Russia or Belarus has been neglected in the simulations (in addition to the disregard of strategic reserves). 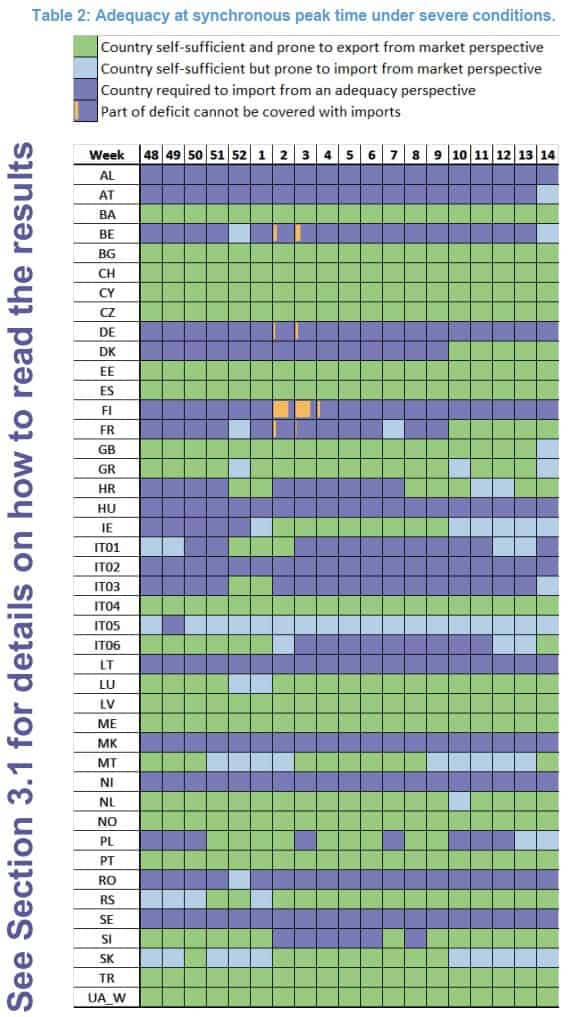 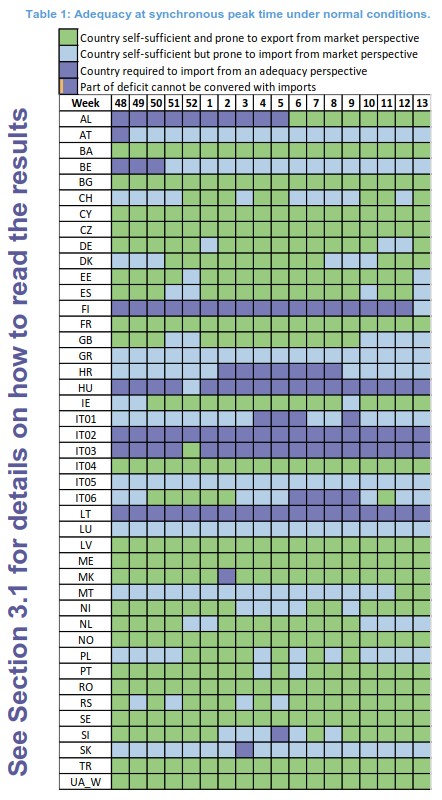 A more detailed analysis of the simulation results identifies that interconnectors are congested between regions of Europe where adequacy issues are observed and the rest of Europe in weeks 2–3.

During these weeks, the available spare generation capacity and DSR from the rest of Europe are inaccessible to the importing region with scarcity. The total reliably available resources inside the scarcity region, including interconnectors, are insufficient to supply the total demand of this region. This finding shows that the results presented in Table 2 are only one of many possible solutions to the optimisation problem, which means that the adequacy issue could be distributed in a different way inside this large importing region or possibly shared between countries based on the solidarity principle (respecting interconnection constraints).

The available generation capacity decreased due to the mothballing of thermal power units in Winter 2018/2019. Under normal conditions, the remaining capacity remains between 0– 2 GW whereas under severe conditions it indicates a deficit up to 2.36 GW. In the long run, Austria depends on gas imports for producing power and heat whereas in the short and middle run, gas import reductions can be compensated by stored gas from the Austrian gas storages.

The Belgian power system will depend on import for the winter 2019/2020 under severe conditions. The import need could go up to 2 GW in January and February. Planned unavailability of nuclear power plants Doel 1, Doel 2 and Tihange 1, after Christmas, are the main driver for this import need.

In winter 2019/2020, France expects the situation to be better than last year, mainly due to a more favourable nuclear maintenance plan. Indeed, all the nuclear units are expected to be available in January and early February when the risk of a cold wave is the highest. In this situation, the need for import should be lower than the previous winter. Nevertheless, RTE (French TSO) will remain attentive to potential delays on maintenance plan and outages, considering the events that occurred during last winter on different power plants. If some maintenance falls behind, margins would be tighter than expected but the adequacy risk should be handled by resorting to more imports. Moreover, should imports not be enough to cope with such a situation, RTE will activate out-of-market measures such as the Industrial Interruptible Service, lowering the voltage level and, as last resort, limited local demandshedding.

The balance between generation and demand is generally expected to be maintained during the winter period under normal conditions. Under severe conditions, adequacy could be dependent on imports and/or use of strategic reserves and out of the market demand side response. A longer cold spell in combination with dry weather conditions and low water levels in rivers in southern Germany, as in winter 2016/2017, could limit the availability of remedial actions.

Most critical periods for maintaining adequacy margins and countermeasures

The period around Christmas and the turn of the year could potentially be critical due to a possible oversupply in the German control area. Although that was not the case in previous years due to the improved market behaviour of the balancing responsible parties, dedicated measures are available, if necessary. There are, for example, extended possibilities to reduce the wind power feed-in in such situations. In situations of high RES feed-in in the north and high demand in the south of Germany, the necessity of remedial actions to maintain (n−1)—security on internal lines and on interconnectors—is expected.

There are several coal units forecasted for decommissioning until the end of the year, however these capacities will be replaced by new, big units (c.a. 850 MW).

Based on these assumptions, no adequacy issues are forecasted for the coming winter. As usual the possibility to import via interconnections, especially on synchronous connections, may be a key issue under severe conditions.

This ‘conventional modelling’ methodology does not aim to provide insights on possible overloads and voltage problems which might occur. In other words, even if the current methodology concludes that no problems are expected in Switzerland, specific problems might still arise (cf. situation of winter 2015/2016).