The ENTSO-E Winter Outlook 2020–2021 expects a general balanced adequacy in Europe, with particular attention on France.

Although the Winter Outlook identifies potential risks of supply shortage in Denmark, Finland, France and Malta, most of these risks can be addressed with available non-market resources. However, some risks remain in France, and exceptional operational measures might be necessary in the event of a cold spell combined with low generation availability.

The COVID-19 pandemic is expected to reduce demand throughout Europe, and many countries are already experiencing lower demand for electricity compared to the same period of the previous year, whereas some countries expect demand to potentially decline further during winter. However, considerable uncertainty remains in respect to possible powerplant planned outage rescheduling due to the pandemics in winter, which could in some cases outweigh the demand decrease and then worsen the adequacy.

Many lessons were learned in spring–summer 2020, which suggests that Transmission System Operators (TSOs) and all power system stakeholders are better prepared than they were for the first pandemic wave.

In France, adequacy risks are identified in the Winter Outlook from November 2020 until February 2021, with risks peaking in November and February. Since the data collection (in September), planned outage periods of the nuclear plants have been rearranged. The update has led to an important reduction of risks for November, but risks remain for the beginning of 2021, mainly in January and February. Risks are identified under cold weather conditions, as demand in France is very temperature-sensitive.

In Finland, some minor risks were identified for January in the event supply gets tighter during the cold weather. However, non-market resources (strategic reserves in Finland) should be ready in January to address these.

Adequacy risks identified in this report are continuously being monitored by the concerned TSOs and Regional Security Coordinators via the short-term adequacy forecast service.

The Winter Outlook is accompanied by a retrospect of last summer. Europe was generally warmer than average in the past summer (June 2020 to September 2020). The period June–August was 0.9°C above the 1981–2010 norm and witnessed the second-hottest June and hottest September on record. High average temperatures, and especially heat waves, at times negatively impacted generation availability and caused supply margins to reach low levels, although without adequacy issues.

The European power system was especially stressed on 15 September, when high cooling demand in southern Europe, low wind generation and low conventional generation availability due to planned outages caused several TSOs to trigger an alert state in the European Awareness System and deplete all real time measures. The COVID-19 pandemic had a noticeable impact in many countries, either because of sanitary constraints not allowing for the execution of planned outage activities or because of economic activities being lower overall. Although the former impact reduced the availability of generation capacities in some cases, the latter, even combined with a warm summer, caused a decrease in energy demand between 2% and 10% throughout most of Europe. 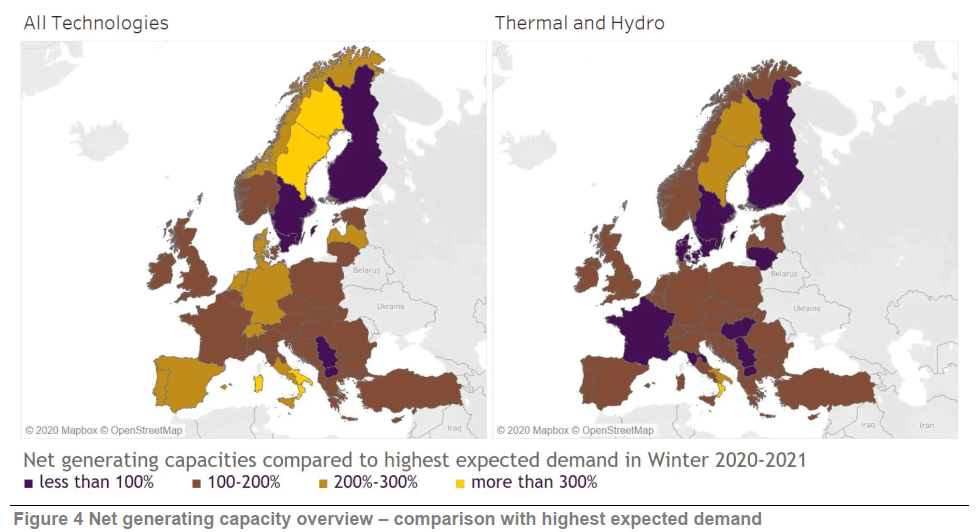 Thermal NGC which is available on the market accounts for approximately 50% of the total capacity of the European power system at the beginning of winter 2020–2021. This is followed by hydro, wind and solar capacities, which constitute the remaining half. The most relevant thermal capacity evolutions during Winter 2020–2021 are shown in Figure 7 and show a net decrease in Europe of over 6.9 GW. The capacity of all thermal technologies in Europe decreases. 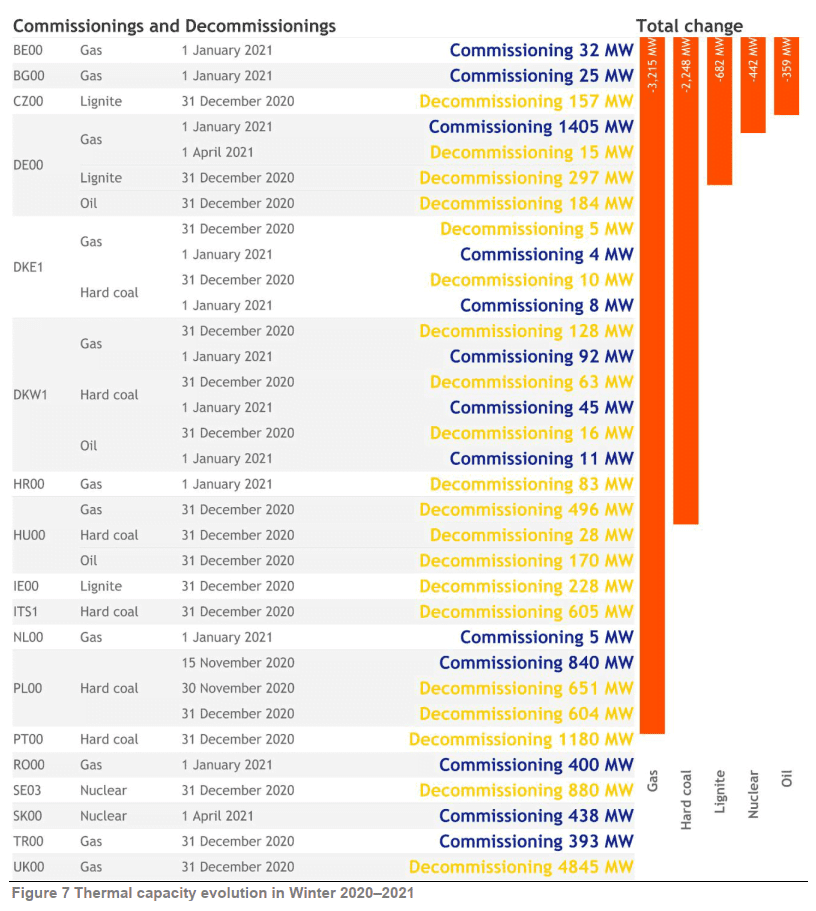 Total planned unavailability decreases toward the end of 2020 and reaches low levels in January, when supply margins are tight in Europe (especially central Europe). A sharp drop at the end of year indicates that many planned outages are scheduled to be finished by end of year; therefore, any delays should be carefully monitored. Planned outages start ramping up at the end of January and follow a linear trend until the end of winter. 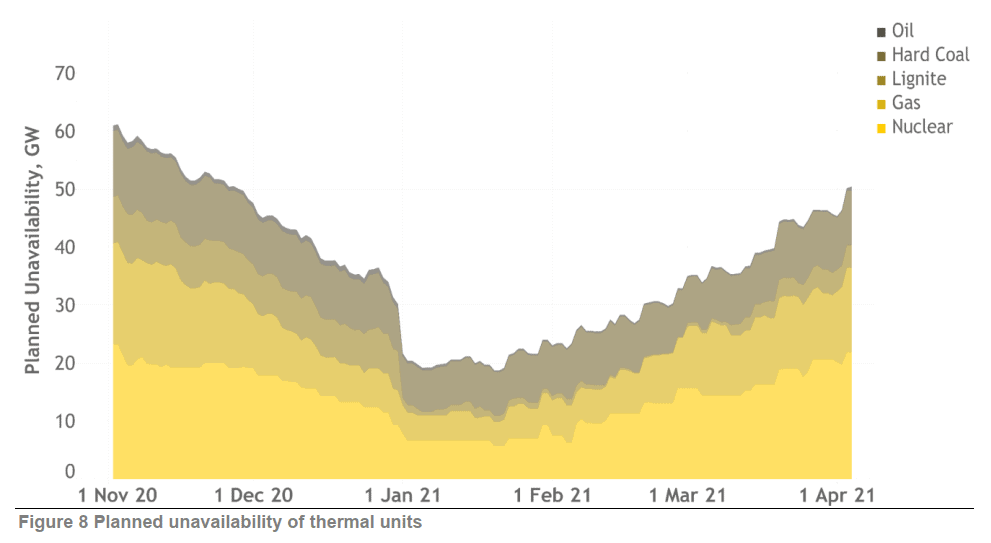 Indeed, during the first lockdown, many nuclear maintenance operations have been extended, which led to a significant reduction of the available nuclear capacity for the next months, but also in the next two years.

Over the last few months, EDF has proceeded to implement many changes in the public maintenance program (published on the European transparency platform), and in particular, the duration of the outages has been adapted to take into account the sanitary measures. In order to optimize the available capacity during winter, some reactors have even been shut down to save some nuclear fuel.

For these reasons, EDF has announced a significant decrease of its production forecast for 2020 (between 325 and 335 TWh, in comparison with a target of between 375 and 390 TWh before the pandemic).

The Winter Outlook report is thus based on the nuclear availability data declared by EDF on the transparency platform at the beginning of September.

Moreover, the numerous extensions of important nuclear outages observed in the past winters in comparison with what is firstly declared on the transparency platform, combined with the successive delays on specific reactors (Flamanville 1 and 2, Paluel 2) raise a climate of uncertainties on the effective level of nuclear availability for the next months, especially as there are numerous stoppages programmed for this winter (about 15 are supposed to be completed before the end of January).

As a consequence, RTE integrates precautionary principles (deterministic extension of outages) in its national winter adequacy forecast, on top of the maintenance information provided by EDF on the transparency platform.

These principles are not taken into account in this WO. The graph below shows the nuclear availability forecast considered by RTE in its national winter adequacy report.

After the closure of the two Fessenheim nuclear reactors that occurred in mid-2020, the rest of the thermal generating fleet is supposed to be now available for the winter, except one CCGT and one coal unit. A slight slowdown of the commissioning pace for the RES could also be observed in 2020, due to the first lockdown.

Moreover, in order to strengthen the security of supply for this winter, RTE and the public authorities have made changes in the last months on the support mechanism for demand-side response, allowing to increase the capacities selected by tenders Combined with the effect of the increase of prices on the capacity mechanism (as a result of increased risk on the security of supply in France), the evolution of the support mechanism for demand-side response has lead to an increase of the DSR capacity available in France of more than 300 MW for ths winter (+300 MW for end 2020 and more than +400 MW for 2021).

However the main risks assessed in the WO for France are identified for very specific weeks (W48 and W6 [8.-14.2.21]), whereas the French report indicates an important risk occurring during the whole winter.