Quelle: www.businesspost.ie – Interview mit Nassim Nicholas Taleb; He is a New York-based Lebanese-American essayist, scholar, statistician and risk analyst who focuses on the problems of randomness, uncertainty, and probability in financial markets and elsewhere.

I have a book called Silent Risk in which I bust all these analytical tools by adding another dimension called tail risk. If something is exposed to tail risk, then your analysis of efficiency is vastly less robust than if it’s not plagued with tail risk.

Thus, what happens is you have a crisis and the debt shrinks organically, with the bankruptcy of the idiot who borrowed and the harm of the idiot who lent. And what you end up with is a smart borrower who probably borrowed enough to not be fragile below the point of threshold, and the lenders who were more astute about the loans they made. That’s normally how it should happen.

But in this instance, the government came in indiscriminately to bail out everyone. So let’s zoom out seven years later – is it seven years already? – and look at what’s happened.

Well, what has happened is nothing, nothing, nothing, nothing new. We did not learn. We have had some kind of pseudo-recovery, mostly fuelled by an increase of debt. So the pool of debt has increased, and at low interest rates from the Fed, which don’t seem to be effective.

Now you have to realise that debt is only to be judged when you pay it back. Life should not be a Ponzi scheme which collapses when you have to pay it back. Is there an element of Ponzi in debt? Well, there’s some element that’s not Ponzi in debt – that’s small – and there’s a Ponzi element. So we didn’t learn much from the crisis. If we look at the narrative in 2009, it was healthier then.

But the efforts of governments in making things cosmetically look good now have been bad.What we didn’t learn from the crisis is that debt and leverage is bad, and we didn’t learn that economists are full of baloney. I have busted them mathematically. Between 2009 and now, I’ve published 45 technical papers, and I have ten more under review by journals. I have found arguments of theirs that are not valid empirically, but no one seems to care. 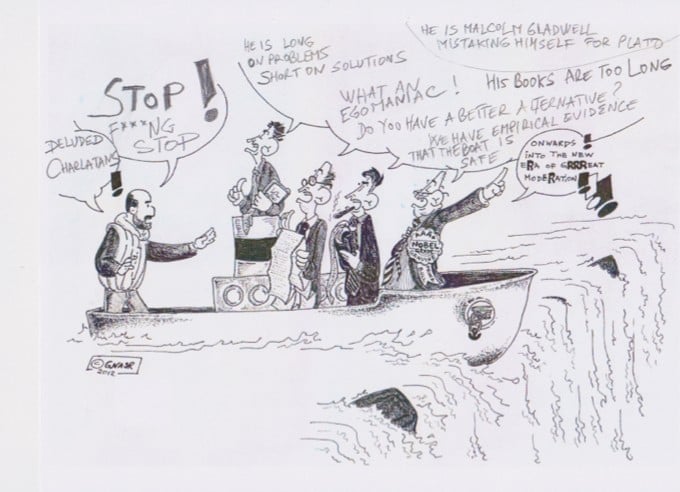